Granada TV
Posted by adm1n on September 14, 2017 in Biography 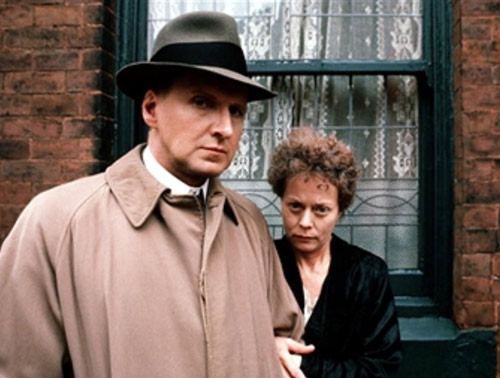 I finished my degree at Manchester Polytechnic in 1979. I left already planning to make an application for postgraduate study in London the following year. In the meantime staff at Manchester Polytechnic had given my contact details to a Granada TV director who was planning to make a TV film about the life and work of L S Lowry. I worked on it with a fellow student and friend Sid Long we were asked to recreate some of his paintings for the sets and recreate drawings from a Life Drawing Room. The paintings for his studio were very realistic copies of some of his most well known and lesser known works. On the last day of filming the sets were cleared, and all of the art works disappeared into the arms of the TV crew. I have wondered over the years if any of those pictures have ever resurfaced and been passed off as originals. I did other set design work for Granada TV and I was also employed through an agency to work for at BBC TV studios on Oxford Road in Manchester. I worked during the night with scenic artists to create realistic sets for the filming of programmes during the following day, these include programmes such as The Secret Life of Don Camillo, Grandad, and Chegger`s Plays Pop.